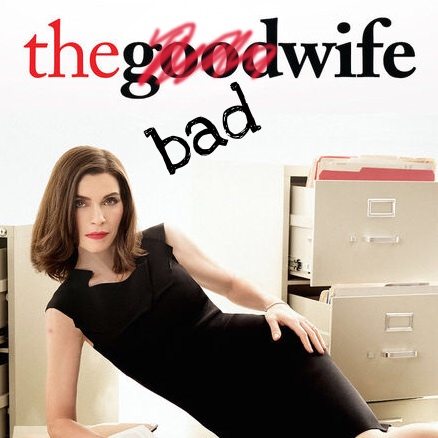 After watching the series finale of The Good Wife, I was prompted to reflect on why we crave happy endings, and why messy unresolved ones leave us feeling deprived and let down. I first wrote about this in a blog post back in 2015. I recalled reading a John Grisham novel that had a terribly unhappy ending. The main character did not get the girl, in fact, he lost everything when she took off with the money and his dreams of a life together. Years later, that book still sticks in my craw because after reading four hundred plus pages and suffering alongside the hero as he traversed his challenges, I was ready to be rewarded with that satisfying sense of redemption, that affirmation of hope that things would turn out okay. Writers make an unspoken promise that no matter how badly they abuse and torment their characters, in the end the protagonist will overcome all odds.

Of course in real life, happy endings are less common and certainly not guaranteed. We divorce, get sick, end up jobless, and fail to achieve our goals. That’s life. It’s one of the reasons we so enjoy turning to the fictional world where we get to escape those harsh realities and rediscover what it means to have hope, to dream big, and to see our heroes triumph. We gain strength when Harry Potter defeats Voldemort. We believe in love when Bella finds a way to be with her vampire. We feel patriotic when we watch an American Sniper be revealed as a warm, caring, loving father and husband. Because American Sniper isn’t fiction, we didn’t get the happy ending our main character deserved, but we can take that hit in our heart because it happened that way and it was a story worth sharing. We grieve and feel for his family and shake our head at how unfair real life can be.

This is why the writers of The Good Wife left so many followers shaking their head in wonderment that after all the years of watching our main character be put to the test, she ultimately is revealed as nothing special, nothing heroic, certainly nothing really worth looking up to. Is that required? No, but isn’t it nice? Two scenes in particular stand out to me in this last episode. In the first, Alicia’s daughter is declaring that she is going to put off college so she can stand by her man, her dad in this case, just as Alicia did all those years ago for him. So, after seven seasons of Alicia charting a new course and having this huge character arc, her daughter basically ends up just like her back where it started, a sacrificial lamb whose own life and needs pale in comparison to the male patriarch who would suffer so greatly (for his own sins and choices) if his family wasn’t there to fawn over him. Really???  It made me want to vomit. Why didn’t Alicia rail against it? Grab her, shake her, say NO DON’T MAKE THE SAME MISTAKE I DID! STAND UP FOR YOURSELF! GO LIVE YOUR LIFE. It’s not that she didn’t try in the moment, but it felt weak, and ultimately she just allowed her daughter to roll over and play the follower. And that was hard to stomach.

The second part was the ugliness in Alicia which was revealed as she shut down Diane, a hardly sympathetic character most of the time, which is why the reversal was all the uglier as Alicia declared they should do whatever it takes for their client, in this case, her husband, a fairly slimy and unlikable guy who may or may not have been guilty. But let’s face it, Peter was almost always guilty of what he was accused of, why would this case be any different? Not that the writers allowed us to find that out. We were deprived of any resolution on just about any front.

So to recap where we stand: Her son is off getting married at nineteen to a much stronger and charismatic girl for whom he has subverted his wants for; his sister has subverted her wants to be there for her father; and Alicia has subverted just about every ounce of character and empathy we had for her to help her smarmy husband get what he wants. Wow, it just felt like the most negative and hateful ending a writer could dream up. Let alone, the fact so many other story lines were ignored so that her dead boyfriend could be brought back. Sure, nice to see Will, but no farewell to Michael J Fox? To the rest of the firm members? Luca? Nope. Just a resounding slap in the face. All I can say to the writers is well, you sure showed me that you can do whatever you want. You have the power to give an audience an uplifting ending or a complete downer. You went with downer. Some might admire the boldness, the way Alicia ended up being more like her husband than she ever anticipated. That may be just fine for a lot of the audience. But I still believe the following:

Fictional stories are meant to transport and uplift us, restore a little bit of hope to our soul so that we can carry on the fight we each shoulder every day. I believe we watch and read stories to be taken on a wonderful challenging ride filled with crazy ups and downs, soaring highs and lows, secure in the knowledge the writer will somehow deliver us to a safe place. That our protagonist will be okay. That’s the reason Jon Snow lived when so many other beloved GOT characters died. We desperately needed to have that sliver of hope to hold onto. I wonder if this is just the new normal in our modern story-life, where writers no longer feel compelled to deliver hope. As if its cliché and old-fashioned to believe in something bigger than ourselves. I, for one, long for the stories that hold out their happy ending until the very end, making it all the more satisfying when we get it. As an author of children’s books, I feel it is important to deliver on that promise. Children most of all need a safe place to escape to where they can be witness to the challenges life has, and be given a sense of hope that if Harry can defeat Voldemort, maybe they can survive middle school.