First Book and Rise Up Foundation to Donate $100,000 for New Books and Disaster Recovery Research to Schools Devastated by Hurricane Harvey

WASHINGTON and ORANGE, Calif. (April 29, 2019)—First Book, the nonprofit social enterprise committed to equal access to quality education, and Rise Up Foundation, author Alane Adams’ nonprofit organization that promotes literacy in low-income communities, are partnering to bring $70,000 in new books this week to Houston-area schools still recovering from Hurricane Harvey, with an additional $30,000 for disaster recovery research. Adams is donating more than 8,000 of her own books, in addition to hosting school-wide assemblies at 13 Houston-area schools that were impacted by Hurricane Harvey on the importance of reading and writing, and providing funds to conduct focus groups to better understand the connection between disaster relief, books, reading, and social and emotional learning.

First Book and The Rise Up Foundation to Bring $130,000 in New Books to Schools, Programs Devastated by Natural Disasters

WASHINGTON and ORANGE, Calif. (January 29, 2019)—First Book, the nonprofit social enterprise committed to equal access to quality education, and the Rise Up Foundation, authorAlane Adams’ nonprofit that promotes literacy in low-income communities, today announced they are partnering to bring $130,000 in brand-new books to disaster-affected communities in Houston, and Northern California. The partnership kicks off this week with an 11,600-book donation to Lake County, Calif., where Adams will also conduct school-wide assemblies at 12schools devastated by last year’s Mendocino Complex Fire. Adams personally contributed 3,600 of the 11,600 books, and made a private donation to the Lake County Office of Education, which will be distributed to educators across six districts in the form of credits to purchase books on theFirst Book Marketplace (www.fbmarketplace.org).

Rise Up Foundation to Donate $25,000 to RIF of Southern California 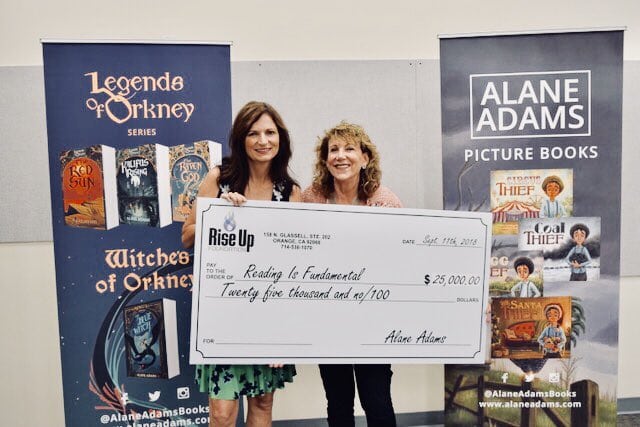 Partnering to bring literacy resources to the children of Southern California

Los Angeles, CA— September 2018— Rise Up Foundation is celebrating 10 years of supporting and providing resources towards literacy in September 2018. In honor of this important milestone, Rise Up is partnering with the Reading Is Fundamental (RIF) of Southern California to further their mission of getting much needed resources and books into the hands of over 100,000 schools and eager young readers in the Los Angeles region.

Critically acclaimed Legends of Orkney trilogy comes to an end

Aug. 17, 2017 — Transmedia author Alane Adams is ramping up for the release of the third and final installment in her critically acclaimed Legends of Orkney trilogy. The Raven God, available on Sept. 12, 2017, follows Sam Baron and his friends as they embark on one last adventure in the magical land of Orkney.

August 10, 2017 – The captivating second installment of The Legends of Orkney series, Kalifus Rising, and the heartwarming children’s picture book, The Egg Thief, were stand-outs in this award season, picking up numerous literary honors from nationally recognized children’s book awards.

This summer enjoy the audiobook of the award-winning novel The Red Sun by Alane Adams, read by Karan Brar actor on Disney’s “Jessie” and “Bunk’d”

June 28, 2016 – SparkPress Audio is thrilled to announce the audiobook release of the award winning novel The Red Sun by Alane Adams, read by Karan Brar, actor on Disney’s “Jessie” and “Bunk’d.”

Karan Brar commented on the middle grade fantasy novel, “The Red Sun is a roller coaster ride of adventure, Norse mythology, magic and mayhem. Between Sam facing awesome villains in the magical realm of Orkney to teachers turning into lizards, I had the best time doing the voiceover for the audiobook. Don’t miss out on this terrific story!” 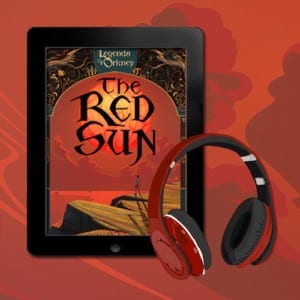 BattleKasters to Cast a Spell on Denver Comic Con and C2E2

Orange, CA and Seattle, WA— April 14, 2015 —Alane Adams, author and founder of Alane Adams Studios, and Artifact Technologies are opening the door for eager fancon attendees to be the first to experience BattleKasters, a location-based mobile game that turns live events into game boards. Based on Adams’ Norse mythology-inspired Legends of OrkneyTM book series, the game will be officially released at Denver Comic Con on May 23. Adams and Artifact are inviting anyone to sign up as testers of the game at C2E2 in Chicago, April 24-26. In addition to meeting Adams and being one of the first to play BattleKasters, attendees can also meet fantasy artist Dave Dorman (Magic: The Gathering, Star Wars), who will be signing art at the BattleKasters booth.

Future of Transmedia and Gaming Debuts at Denver Comic Con

Denver, CO— May 18, 2015 — BattleKasters, a groundbreaking new mobile gaming experience based on Alane Adams’ Norse mythology-inspired Legends of Orkney™ book series, makes its debut this weekend at Denver Comic Con with live gameplay, book signings and a panel discussion on Saturday morning. The panel, BattleKasting: Denver Comic Con as Game Board, will include the first public demonstration and backstory of BattleKasters, developed by Artifact Technologies, and the unveiling of brand new art for the game from celebrated fantasy artist Dave Dorman (Star Wars, Shadowrun, Wasted Lands).